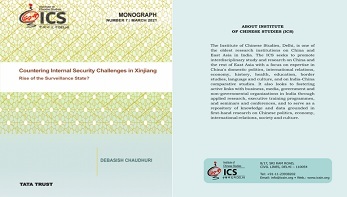 Debasish Chaudhuri’s latest monograph is an important study combining serious desk research with empirical perceptions collated over many years by the author in his fieldwork. While the broad subject is one visited by him in a full-fledged work some years ago, the monograph breaks new ground and brings fresh detail and perspectives from a range of Chinese official and non-official material as well as other external research. The Xinjiang problem is generally understood by most scholars outside China as a manifestation of identity politics, marked by the ethno-national resurgence of the Uyghur population. It has stemmed from a prolonged history of interethnic tensions, discrimination and prejudice that have been characteristic of the ethnic policies of the Chinese state combined with other elements such as Han supremacism, the suppression of protest or dissent, as well as the undifferentiated repression of all forms of Islamic practice and local culture within the region.