Conference on Domestic Governance in China 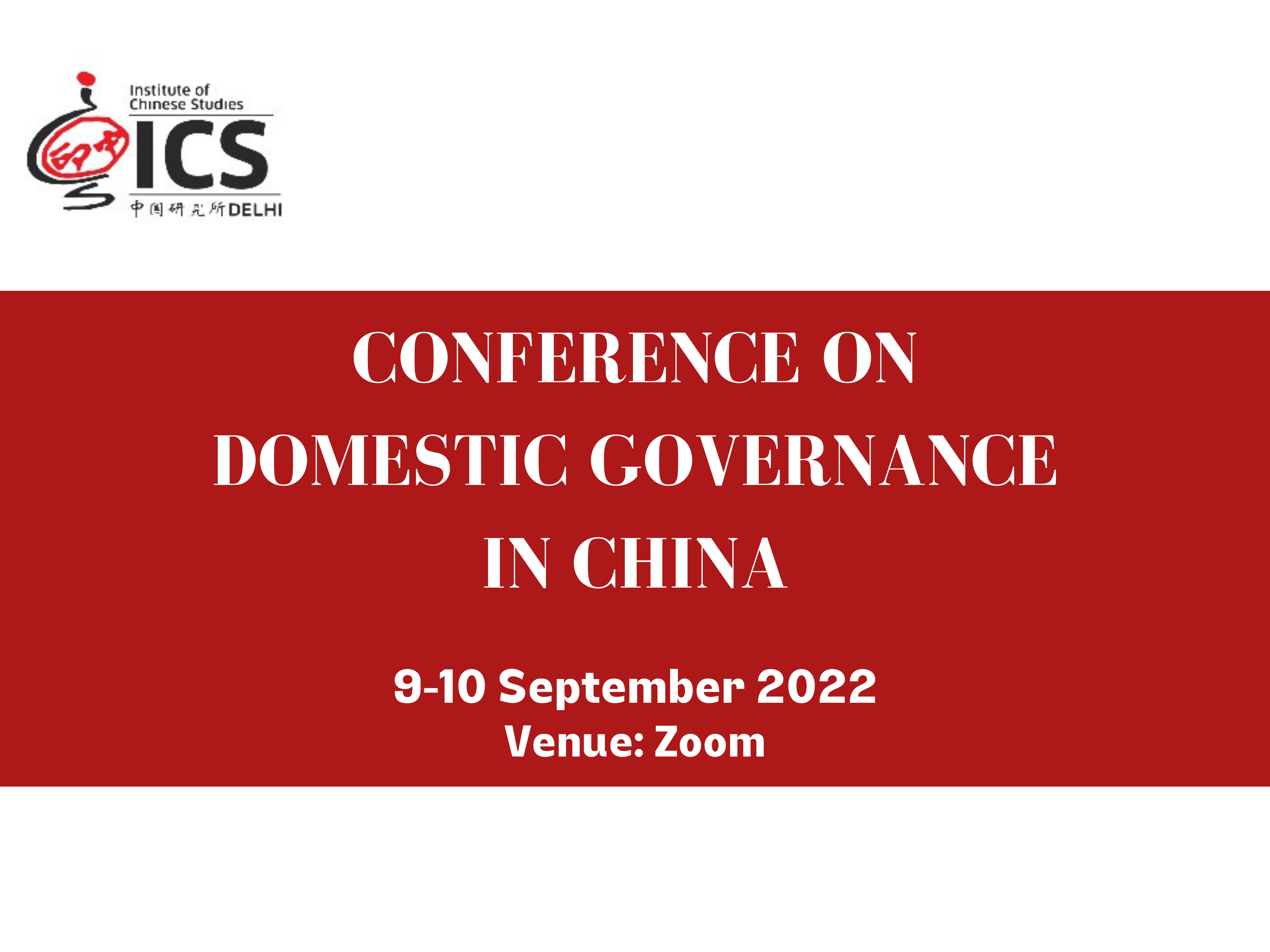 The governance debate in China has many crucial aspects regarding the society-state-economy relationships. The present conference on the domestic governance in China unravels this debate by exploring the nature of the Chinese Communist Party (CCP) and its relationship with the Chinese state; the economic, science and technology developments, civil-military relationship, sub-national governance and the domestic imperatives of China's foreign policy. The various panels of the conference present a nuanced understanding of each issue, the implicit challenges and likely impacts on the future trajectory of China's politics.

Since the CCP completed one hundred years in July 2021, it has emerged that loyalty to it is the sole criteria for upward mobility within the Party, society, politics, business, and life. The panel, The Party in Primacy, convened by Hemant Adlakha, critically examines whether the "historic" adulation by the Party of Xi derives from a position of its strength or weakness; how Bonapartist the current regime is? Further, are slogans such as "China Dream", "national rejuvenation", "China to correct income inequality", "equal access to all by 2035," and "common prosperity" populist measures to counter radicalism in society due to gross social inequities? Finally, is Xi's "return to Mao's Cultural Revolution" a reflection of factional infighting inside the Party between those defending China's private corporate "capitalists" the "nationalist" businesses?

Despite reforms and opening-up policy registering outstanding growth and China establishing itself as a new economic development model, it faces considerable challenges. The concerns over unbalanced growth patterns, regulatory oversights and risks of crony capitalism persist. The state continues to intervene in counter-cyclical monetary and fiscal policies whenever economic growth slows down and investment slumps, but these are not sustainable efforts. Moreover, in times of pandemic, anti-globalisation and trade war policies and state control over the nation's economy have further escalated tensions. The panel on China's Domestic Economy convened by Aravind Yelery analyses whether China's economic model is proving wasteful, evidenced by its surging debts; Can the Chinese state limit its dependence on investment spending? Would the economy's supply-side maintain lead over the demand side by addressing issues related to in-depth institutional planning and long-term adjustment and not just the "elimination of excess capacity"?

It is only through innovation that China can manage these economic factors, and the way the CCP governs science, technology and innovation (STI) has a crucial bearing on its credibility and worthiness to fulfil its modern-day version of the "Mandate of Heaven". However, the main factors of production—land, labour and capital—are all under severe stress from environmental degradation, declining population, wasteful use of capital and a host of other reasons. The panel Governance of Science, Technology and Innovation in China convened by Ravi Bhoothalingam examines the governance structure of modern China in innovation; its adequacy for the growth of principal components of STI; the risks; and the efficacy and resilience of China's governance structure to deal with them- given that STI depends on the global circulation of ideas.

Another dimension of governance is the civil-military relationship in China. The role of PLA in the past two decades in domestic governance has reduced due to military reforms and the resultant reduction in PLA size, yet the PLA-Party and PLA-State relations play a significant role in the operational preparedness of the PLA. The panel on New Trends in PLA and its Role in Governance convened by K. K. Venkatraman focuses on the Central National Security Commission (CNSC) as a part of the Party Central Committee, including various aspects of national security in domestic, external, traditional and non-traditional realms; PLA-Party-State relations in terms of CMC's control over the new domains of cyber, space and electronic security as well as the traditional ones like land, sea and air and the armed police force; "Dual-Support" work; and military-civil integration. It explores the role, composition and functioning of the CNSC and its impact on the government's decision-making; the impact of Article 17 of the Defence Law impact on PLA-Party- State relations; how PLA and the provincial/local governments interact and assist each other and finally, the PLA's impact on the development of the civil sector.

A different aspect of domestic governance in China is sub-national governance. The provinces have considerable variations in economic development as border provinces, coastal provinces or provinces in the hinterlands, living standards, history of industrialisation, and central government policies. Moreover, with fiscal decentralisation, provinces have emerged as quasi-autonomous economic units wherein different models of revenue generation, market enrichment, and infrastructure development policies emerged. The panel on Sub-National Governance in China convened by Ritu Aggarwal examines the role of province, county and township in generating economic growth by focusing on the locational advantages and local characteristics of sub-national units. The panel will be focusing on the development strategies adopted by the provincial governments to integrate into the structural process of economic globalization. How do the provincial leadership maintain a balance between central policies and local needs and interests?   Furthermore, how do these sub-national entities build new networks of power both at the horizontal and vertical levels through bringing investment, infrastructure development and commercial operations in different regions in China?

Finally, preserving the stability and centralising power continues to be one of the CCP's top governance priorities. As a result, the Chinese government officially spends more on "stability maintenance" than on national defence- instilling crisis and insecurities, affecting China's foreign policy tenor, and imparting a dramatic and aggressive turn to it. The panel on the Domestic Imperatives of Foreign Policy in China convened by Rityusha Mani Tiwary focuses on popular nationalism (which helps CCP against any perceived weakness or indecisiveness domestically or abroad); China's self-image, and national identity (exploring the overlap and tension amongst various versions-as a traditional universalistic civilisation-empire or a modernising republic, a socialist country, a third world developing country, a rising power in an international order dominated by western powers, or the creator of a new Chinese model of development, rising above national humiliation and oppression by the western powers); and territorial integrity (emerging from the separation of Hong Kong and Macao and their subsequent return and the loss of Taiwan). It explores how the competing versions of nationalism impact China's foreign policy decision-making, what kind of power is China likely to be, and whether territorial integrity is the supreme virtue of China's foreign policy.

Wednesday Seminar | The Comrades and the Mullahs : China, Afghanistan and the New Asian Geopolitics | 11th May @ 3:00 PM IST | Zoom Webinar