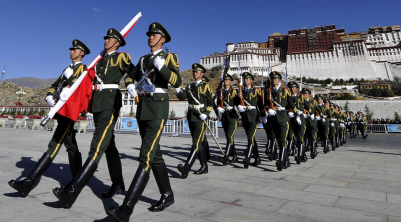 Under the leadership of Xi Jinping, along with the United Front Works Department and the various security apparatus in the country, the Central Commission for Discipline Inspection Commission (CCDI) has been deployed to counter and subdue ‘separatism’ in Tibet. At the second plenary of the 19th CCDI meeting held from 11-13 January 2018, Xi, among others, gave a call for ‘crackdown on gang crimes to uproot both the gangs and the “protective umbrellas” above them’ (CGTN 2018a). The announcement was dubbed as a ‘campaign against organized crimes’ in a report by the South China Morning Post (Mai 2018a).

In Xinjiang and Tibet, however, the national level announcement was interpreted and adapted to suit the local agendas. Hence, instead of organized gangs or triads, the targets for attack are the so-called ‘separatists’.The authorities saw the triad in Xinjiang as embodied in the ‘three forces’ of ‘separatism, terrorism and extremism’. The Tibet Autonomous Region (TAR) followed suit a week later to announce it would target people promoting the following: the ‘middle way’, ‘“Dalai surrogates” who operated under the banner of culture and environmental protection, and others who called for the “protection of the mother tongue”’.