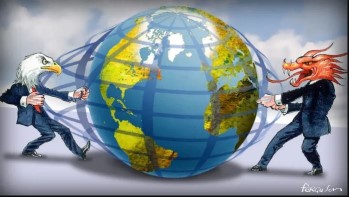 The balance in the the distribution of wealth and economic power is dissipating towards the East. The new narrative is that Rising powers like China are seeking to reshape the prevailing international system that better serves its national values and interests and reflects its own worldview. Due to its growing material power, China under Xi is becoming more vocal about the discrimination in ‘discourse power’ by a West biased international order. Thus, diversity in historical experiences, cultural identity, and political thinking lies at the heart of the system crisis that the ‘Liberal International Order’ is currently confronting. Today, the complexities of Sino-US strategic competition are being realized more than ever before as the challenges to American centrism continue to grow due to Beijing’s proliferating regional and global footprints. This has raised larger questions about how the western democracies will operate in this new geopolitical era to preserve the existing ‘rule-based’ democratic international order. The paper seeks to assess Xi’s view of the world and his intentions for the prevailing US-led global order. The paper argues that Beijing has no intention of architecting a whole new framework altogether and seeks to shed light on the regime’s approach toward the West-centric world order.