Divorce Application Turned Down 4 Times in 5 Years, Why is Divorce so Difficult in China? 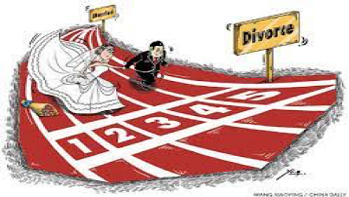 On 3 March, 2020, Ms. Ning Shuahua sued her husband in the Hengyang County Court for divorce. This was for the fifth time in the past five years Shuahua took the bold step. She is from China’s post-80s generation and lives in Jingtou town (Hengyang County), Hunan province, China. On all previous four occasions, her divorce petition accusing her husband Chen Dinghua of gambling, was rejected. During this period, Chen Dinghua had been detained three times due to divorce related disputes; Ning Shuahua too was detained once for the same reason; the Hengyang County Peoples’ Court had also issued habeas corpus twice. Chen Dinghua has on several occasions told the local press he would retaliate once the divorce comes through.