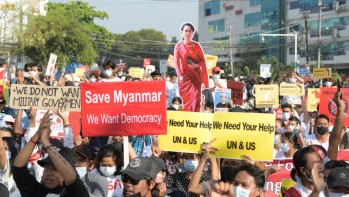 For Myanmar, which has been under authoritarian military rule for several decades, the restoration of partial democracy in 2011, in a power-sharing agreement with an elected civilian government, notwithstanding the military’s dominance, was a ray of hope. In spite of being under the shadow of a military-dominated constitution, Myanmar achieved considerable progress under such a "semi-democratic” setup. Yet, due to the defective constitution, framed by the military with the intent to preserve its control over state power, the threat of subversion of its civilian institutions has always loomed over Myanmar's democracy. While the government-military relations worked relatively smoothly during the four-year tenure of the military-backed USDP government, they became increasingly tenuous since Aung Sang Suu Kyi’s NLD assumed power in 2015. The sweeping victory of NLD in 2020 for a second consecutive term, demonstrated not only the rising popularity of Daw Suu Kyi but also the sidelining of the military's voice in the elections, which exacerbated the paranoia of the army and led to the overthrow of the civilian government in February this year. In the confused situation that followed, despite widespread international condemnation of the coup, efforts by the international community to restore democracy seem unlikely to succeed as some key nations still back the junta, mainly to secure their own economic and strategic interests.