This webinar will explore two paradigms that have influenced the study of Chinese history and society in Europe - seeing China as a ‘civilization’, and seeing China as a ‘nation state’ . The former involves the emergence of Sinology in European academia and the movement away from early missionary records and writings to the study of China as an academic subject located in Universities. This is the classic phase, often dubbed Sinology and dominated by Confucian studies, philology and textual histories. The emergence of the nation state as a unit corresponds to the emergence of post colonial societies and includes the self perception of ‘imagined nationhood’ of these new States. This is the second framing of China; concrete studies of China’s nation building process that share commonalities with other development processes. Area Studies became the norm, allowing for micro level studies of China’s Communist politics, society and economy. This was necessarily a geo-political framing and remains so even after China’s opening up post 1978. Today, one again notes an emergence of a ‘civilization based framing’ of China. This has to do both with Europe’s own search for unity and a commonality of civilization, the European Union. It also has to do with the rise of China and its own push for a return to nationalism anchored in ‘civilization exceptionalism’ as opposed to just a modern political nation state. Its rise to power is being seen as a civilizational challenge to Western thought and political institutions, and is an intellectual challenge.

Dr. Ravni Thakur is a faculty member for Chinese Studies at the Dept. of East Asian Studies, Delhi University. She has been Director of the Euro-Asia Institute, Jamia Millia and Prof. for Chinese Studies at the International Academy, Jamia Millia. She has a M.A. in Development Studies from the Institute of Development Studies, The Hague and a Ph.D. from the Sinology Institute, University of Leiden, The Netherlands. She has taught at the Institute of Oriental Languages and Civilizations, Sorbonne Paris before returning to India and joining Delhi University in 2003. She has been a Senior Fellow of the Delhi Policy Group and a Senior Fellow at the BRICS Policy Research Institute in Rio de Janeiro. She has lived, worked and studied in China and has a Diploma from the University of Beijing. Her current teaching and research interests look at the political economy of China with a focus on social stratification in China and India-China mutual perceptions.

Dr. Madhavi Thampi is Honorary Fellow at the Institute of Chinese Studies, and a former editor of its journal China Report. She was an Associate Professor at the Department of East Asian Studies in Delhi University, where she taught Chinese History. Her publications include the monograph Indians in China, 1800-1949 (2005). She has co-authored (with Brij Tankha) Narratives of Asia from India, Japan and China (2005), as well as a book entitled China and the Making of Bombay (with Shalini Saksena, 2009). She is also the editor of the volume India and China in the Colonial World (2005, 2010). 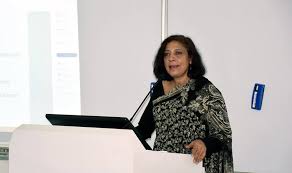