South China Sea: A Triangle of Dispute Between China, Southeast Asia and India 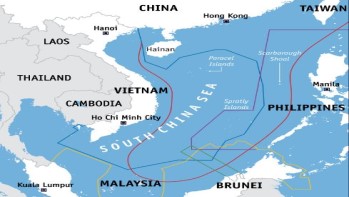 The South China Sea is most disputed in terms of its geopolitical location and geoeconomic importance, making it strategically relevant in global politics. The South China Sea is a blue water strategic dispute for fishing and natural resources which involves territorial and maritime claims within the region. The South China Sea have the most longstanding dispute between China and Southeast Asian nations in international affairs. It is one of the busiest waterways and strategically crucial for commercial and military exercises. However, many non-claimant countries, including India and the US, want the South China Sea to remain an international water body in accordance with the United Nation’s freedom of navigation operation law. The region has been growing significantly for India’s trade-economic linkages with East Asian nations and the Asia-pacific region. India’s presence in the sea is based on economic, strategic, and diplomatic interests and a long term vision to emerge as a capable regional actor for Southeast Asian countries against rising China’s domination in the region.